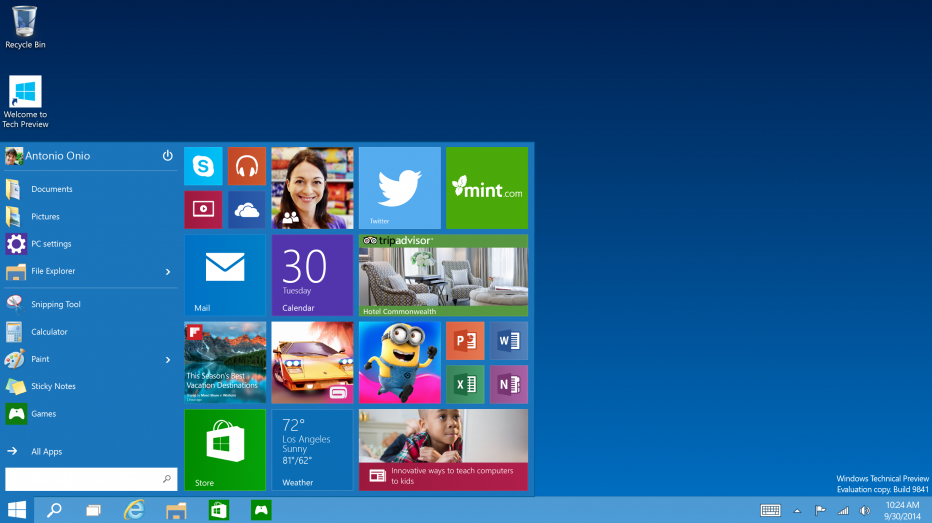 Microsoft has just unveiled its next window version on September 30, 2014. Windows 10 is choose to skip a version number and jumped from 8 to 10. Consideration about that final version of Windows 10 launched would be expected in early quarter of 2015 while its technical preview has been already release which would be ..

Summary 5.0 Great
Features 5
Ease of Use 4
Documentation 4
Support 5
Value of Money 5
Summary rating from 1 user's marks. You can set own marks for this article - just click on stars above and press "Accept".
Accept
Summary 4.6 Great

Microsoft has just unveiled its next window version on September 30, 2014. Windows 10 is choose to skip a version number and jumped from 8 to 10. Consideration about that final version of Windows 10 launched would be expected in early quarter of 2015 while its technical preview has been already release which would be targeted at PC experts who understand the risks involved in downloading unfinished software. Technical preview was announced to be available starting October of 2014.

what cloud be its technical possibilities of preview copy windows 10, when we see there are windows users who are engaged since decades with this operating system, well in just case ; this preview copy of Windows 10 will be go through a lot of changes with updates, which you can simply just expected but it will have access to the Feedback app. Windows Feedback app is introduced in this version to provide helps and secondary for feedback to Microsoft about the different features they are going to add also with removing to Windows 10 in the preview period and thus, helps you be a part of the team that improves and polished their windows model apart of any registration quarry. It just seems that available facility of free user is only provide for preview copy and feedback but there are many new features that a user can try out with windows 10.

One thing is sure from new designed window 10, that it will have a new smart start menu taken from window seven over with a blend of live tiles and classic desktop apps inspired from window 8, also Windows 10 apps don’t have to run in a forced full-screen mode wich obviously making it more useful for desktop users. Windows 10 would be distinguished featuring with more improved search exploration and file search option and features. Microsoft says at Windows press release that it will also provide multiple desktops supports now. If these are features you had been crying out for since switching to Windows 8, then the Windows 10 Technical Preview will be quite appealing.