Ampy smart gadget to generate electricity In the world of smart Phones, charging is big aspect, smart phone holder person mostly search charging port because they have not enough time to leave their smart phone because allot of things attach with their smart phones, so if we tell you that there was a gadget that ..

Meet with Ampy, a gadget to produce electricity with Your body movement

In the world of smart Phones, charging is big aspect, smart phone holder person mostly search charging port because they have not enough time to leave their smart phone because allot of things attach with their smart phones, so if we tell you that there was a gadget that could generate energy using your body movement and stored it? Can you believe your answer will be Yes, because technology is going upward anything will be expected, it will be amazing that you jog for 30 minutes and have enough power generated to provide 3 hours of battery life to your smartphone, It will possible with Ampy, a gadget used nPower PEG concept’s, So it’s your turn to walk around with this gadget and produce enough energy to charge your Cell Phone,

Much simple use Ampy

If you talk about the size of gadget its about half of the size of regular smartphone, you can put this gadget on your wrist, hips or arm, If you don’t like strapping the device then you can simply carry it in a bag. The basic concept has been upgraded by 3 Northwestern University Ph.D. candidates who have come up with Ampy as the final result, which is wearable, smaller and far more efficient. The gadget benefits from a proprietary linear inductor that allow the kinetic energy’s transformation into electricity and storage into a lithium ion battery, after storage, energy can be used with useb port installed in this device. 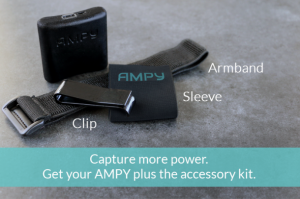 With this device if you walk around 10,000 steps or 30 minutes in a day there is enough energy will be produce to charge your to allow for 3-hours’ worth charge, Ampy has a 1,000 mAh storage and this can charge your smartphone from zero battery to 50-75% of battery level, its can fully charge your smart small gadgets like smart watches, and fitnesstrcker, The gadget is connected to your smartphone via an app that displays information like the amount of energy created.

The dimensions of this useful gadget have about weighs 100 grams and measures 3 inches square with a thickness of 0.75 inch. The backers shall be able to get a unit for $75 with deliveries starting in June, 2015 and a price tag of $95.